As the war progressed, the moor was developed for the training of tank crews. Roadways were constructed using rubble from the Sheffield Blitz in December 1940, when over 650 people were killed, 1,500 injured and 40.000 people made homeless. Firing platforms and targets were built on Range Moor, and workshop services built on Thickwoods Lane. Upper Midhope saw the construction of an army camp. As the camp expanded a NAAFI was provided for the troops, staffed by  local women.

The range saw the arrival of the new British Churchill tank as troops from Britain, Canada and other nations trained for conflict. Evidence of this military activity is still visible in the landscape. There are disused targets, the remains of roadways, firing points and reinforced bridges on Range Moor and Ewden Heights and a tank wash can still be found on Barnside Moor. The targets were built using bricks made in Barnsley. Due to the hardness of the bricks they were ideally suited for the construction of the targets.

Local resident Alice Badger, recalled how in the latter part of the war, Churchill tanks arrived at the battle school. Her father talked to the Brigadier, warning him about the moorland bogs on the range. The Brigadier believed that the Churchill tank could tackle anything, until it had to be towed out.

Churchill tanks were fabricated at Newton Chambers Factories Thorncliffe Works at nearby  Chapeltown. More than a thousand tanks were made as well as parts for the Mulberry harbours and Pluto line. 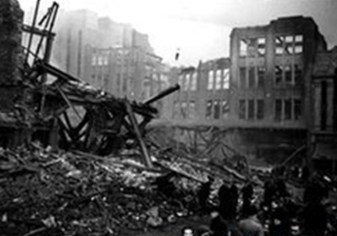