Newton Chambers & Company Ltd. produced in very great quantity weapons and munitions of many kinds, but amid it all found time and gave attention to the careful training of hundreds of boys and girls, ensuring them a proper introduction to industry. That may prove to have been their greatest war achievement.

As producers of coal and its by-products, as manufacturers of foundry products and coal chemicals, and as structural engineers, manufacturing, welding, and erecting industrial plant of many kinds and prefabricating tanks, vessels, vehicles, and even ships, the war effort of their 8,000 people was of the highest importance and was vigorously maintained throughout the war.

For Services and Ministries

The Admiralty, War Office, Ministry of Supply, Ministry of Fuel and Power, and Ministry of Production were all closely concerned in the output of the collieries, coal distillation plant, chemical works, and engineering plants of Thorncliffe.

The four collieries raised over 6,000,000 tons of coal, and converted a quarter into astronomical quantities of fuels, fertilizers, motor spirit, and naphtha and tar products.

Over eight billion cubic feet of gas (a fifth of the city’s total requirements) was sent from the coke-oven plant to Sheffield for industrial and domestic use. In addition to the volatile products, 1,250,000 tons of coke was produced. 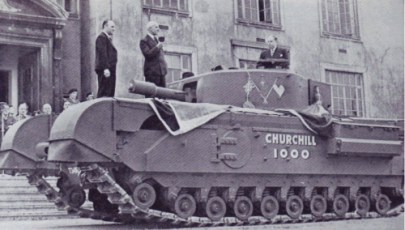 “Christening” the 1,00th Churchill Tank made by Newton Chambers & Company Ltd in their Engineering and Excavator Manufacturing Shops at Thorncliffe

Great quantities of otherwise unusable coal dust were briquetted for use as boiler fuel. The coal-oil products after the production of great quantities of benzole, toluene, and sulphate of ammonia were processed into disinfectants, insecticides, fungicides, wood preservatives, creosote, and road tar.

The Director-General of Tank Production, Sir Claude Gibb, came to Thorncliffe to “christen” the thousandth tank, and on that occasion said: “Newton Chambers had no right to expect that they could produce a tank as complicated as the Churchill, but they did it, and in was an amazing feat. Not only did they produce very fine tanks, but they were the chief producers of Churchill tanks in Britain and therefore in the world.”

Another novel war task given to Thorncliffe craftsmen was the fabrication and assembly of ship sections. In 1942 the blast furnace at Thorncliffe completed its “life” and was dismantled to provide a site for urgent work demanded by the Admiralty.

Teams of welders, including women, had to be trained, and jigs had to be designed to fine limits. Midship sections of tugs, tankers, frigates, and cargo vessels to the total number of over a hundred completed ships were made at Thomcliffe.

The last business was introduced at Thorncliffe a little before the war and had been developed to the point of line production when the Churchill tank came along and Newton Chambers were asked to turn over to the supremely important to of building the hull and assembling the complete vehicle, including the armament.

A factory specially designed for excavator production was rapidly converts and from this factory and the engineering shops at Thorncliffe, over 1,100 Churchill tanks were turned out.

“Bombardons” and “whales” were made for the “Mulberry” harbour, “conundrums” for the “Pluto” oil-pipe line, “sharks” for the repair of damaged dock-gates, and “digesters” for the new whaling factory ships.

Meanwhile, excavator production was kept going, and fleets of these machines were produced for such diverse uses military entrenchment, drainage, the preparation of airfields, the clearance blitzed areas, and the mining of open-cast coal. 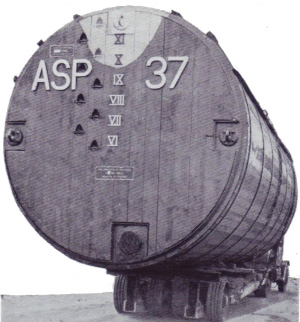 The production of hundreds of thousands of light castings for bombs, grenades, trench mortars, and land mines occupied a small corner of the foundry for month or two.