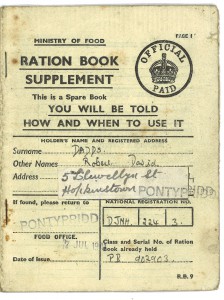 that I am reaching more senior years, I think of the past with joy and tears.

The innocent years of carefree play, with barrows, hoops and bales of hay. Tin trains around a circle went, until the rails became all bent.

The games we played at dusk for fun, with cotton tied to knockers and run. To hide nearby on all fours, waiting for someone at the doors.

Peering into the night to see, nobody there, how can that be ! September in the hop fields’ time, sleeping on beds of bine.

The rows of tin sheds, with the hay, it was our summer holiday.

At night outside with folk around, the fire burnt to embers on the ground. Londoners sung their cockney rhymes, revealing all their happy times.

I heard the murmurs that war was near, what does it mean, it’s not so clear. A pile of shiny steel sheets arrived, straight and bent and galvanised.

In the garden we start to cut, a hole in which to build the hut. An Anderson was its name, but I thought it was just a game.

Then from the clouds above I saw, aeroplanes that seemed at War. Screaming down upon each other, and then flying to the clouds for cover. The rat-a-tat that seemed so near, confirmed the worst, War was here.

It’s not so long before I learn, that for my family I will yearn. My father’s off to War you see and I become an evacuee. 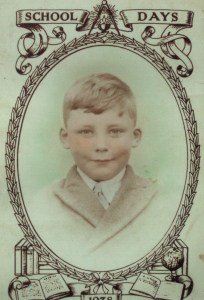 A cardboard box that’s tied with string, inside a gasmask, what a thing. The train arrives and off we go, where to? That I don’t know.

The country passes with floating stream, at last we’re there. I’m in a dream.

We stand there with all the others, looking at our new found Mothers.

I feel inside a beating heart, as all the others begin to part.

My sisters been the chosen ones, and I am left here all ready to run.

Why do these people speak like that? Now they call me “Bobby Bach”

It’s not so long before I find that everyone is so kind.

They’ve opened up their homes to us, evacuees, without a fuss.

The boys I met soon taught me tricks, to smoke a pipe from acorn pips. We found the buttends from Goldflake and hid in dens to participate.

I sent my Mum a little cross made from matchsticks in a box.

The Picturehouse was just nearby with a film of Wales I heard them cry.

I wait until halftime is near and sneak in sitting at the rear.

It’s true because upon the screen, a man with a black face can be seen.

He’s working hard down a big black hole, digging what looks like coal. The Men of Harlick rings out loud and soon they’re singing in a crowd.

‘The Prowd Valley’ was the film I saw, and later, I was to learn.

A Gypsy with a caravan painted inside and out, so grand.

Told me about the valleys near, where families spent their lives in fear. With coal falls deep down the mine and lives lost in amongst the grime.

The mountains I have never seen for here in Cowbridge there’s just a stream.

We made a boat from old oil cans and sunk in midstream with ‘all hands’ Soon I’m off to meet my Mum and live in ‘Ponty’ that should be fun.

With terraced homes row after row, looking down the valley below. The river Taff cascaded down, into a bridge and under the town.

A happy day was always made, at the Salvations Army up the Craig. They taught me how to sing and play and praise the Lord day after day.

The ‘Open Air’ on Saturday night, was an invitation to see ‘the light’. The Captain cried ‘If your’ve nothing on, come with us and sing a song’. We stood in lines at the station, with hearts full of anticipation.

The big day of the year was here, as Barry Island was getting near.

Grey smoke with steam poured from the funnel, as the train puffed out the tunnel.

My Gran arrives and later dies, Mum’s lost her Mother, we sit and cry. Dad’s posted to the Holy Land, giving blind people a hand.

He sends us postcards with writing in a ring, to read them you turn them with a pin.

Mum decides to go back home, and once again I am alone. Up the valley I must go to Merthyr Tydfil where I don’t know?

The ‘Army’ has found a new ‘Mother’ for me, with love a care a guarantee.

Twas at Capentuydd where my new life’s to be,- the home of a dear old Welsh lady.

Her home was ‘two up two down’ in a terrace near the ‘Cut’. Beside the fire all grated black, her only means of cooking sat.

Hands that showed her household chores, scrubbing stones that were the floors. 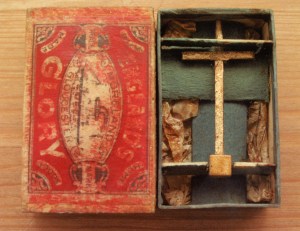 She told me all about her life, of hard times, trouble and strife.

Her companion for many years, a little dog, when died brought tears. Welsh cakes cooked on a black steel plate, for this feast I was never late. Sunday was a special treat, when her family came to eat.

Each plate different from the other, from years of being a careful Mother. Knives and forks were a mixture to, some dating back to ‘Waterloo’.

An old gramophone she gave to me, with some records by HMV.

The day I was moved I sat and cried was my Welsh lady about to die? Down the valley I was sent to live with a family ‘on the rent’.
Two sons and a husband worked at the mine, coming home all covered in grime.

The smell of carbolic in the bath, laid out for all before the hearth. Father was first in the tub, while the others took turns to give a rub. For here in Aberfan I found the true spirit of miners underground.

The national pride flowed from their singing, born inside from life’s beginning. I loved to climb the big black tips and ride on drams just for kicks.

A welsh girl I met one day, was the first to steal my heart away. We picked bilberries on the hill, holding hands, oh what a thrill!

I soon discovered the birds and the bees laying under the trees.

Her name was Christine I recall with my name in a heart on the wall. After four years in the valley , Bobby Bach had become a ‘Taffy’.

These folk had given to me, their love with the family.

I came as a boy, and now I’m a lad, with a future ahead so why so sad? The vision of my home in Strood, was about to be renewed.

The scars of war were all around where houses were was just now ground.

The years gone by had dimmed the day, when mum decided to send us away.

The sacrifice had ensured that we would also have a family.

And here we are some near, some far, all joined together to say -. Happy Birthday to you Mum who’s Ninety Years Today.

The little cross within the box can tell another story.